Elior is a leading provider of  food services. Recognising the impact of food services on society, it has made sustainable  development an integral part of  its business strategy.

A review at a single Elior site suggested a range of initiatives that offered possible annual cost savings of £2,441 and diversion of 1.6 tonnes of waste from landfill.

By implementing a tracking system  the company realised that it was  throwing away greater levels of food than imagined.

“Recording our wastage by weight has helped us enormously.“

“In the first week, the chef manager  phoned me to say he couldn’t believe that they had filled a whole bag of food waste. Previously, we had  no indication on the volume being wasted. If anything, just holding on to the waste before disposal allows you a clear view of the quantities.”

Get your kitchen crew involved in making savings. The “Guardians  of Grub” poster will be a great addition  to your staff noticeboard.

“Our teams have embraced our culture of sustainability. At one site, we use the remaining peel from a machine that squeezes fresh oranges, to make marmalade, which is sold on site to raise money for charity”

GETTING THE WHOLE TEAM INVOLVED

An initial review showed that food preparation  techniques could be tweaked to make savings.  The chef manager organised a training session to  demonstrate the correct way to prepare fruit and  vegetables and make the most of ingredients.

Staff have been keen to participate, suggesting  menu ideas that make use of items that were  previously under-used, such as the cooking of  parsnip peelings to make soup. This technique  acts as an extension of the company’s already  rigorous menu planning system. The system  ensures that only 1.6 per cent of the annual food  budget goes unsold.

“For our Kitchen Planner we look at what’s in season, and also receive a market report from head office  which tells us which items are likely to be difficult to  source or expensive. For example, a drought in the South East could mean low yields of cauliflower, so we would remove them from our menus and replace them with broccoli. We also check information such  as the number of people likely to be on site and  consuming food, and we base our ordering on these figures.”

The use of clear bags when separating food  waste has been crucial to success.

“When you can actually see the mass, it makes  an enormous difference. We learnt quicklythat some of the things going in the bins during  production such as the tops from peppers, for example –could be made use of. The main point  for us was that staff were completely unaware  of the physical quantities being thrown away. We were always under the belief that we didn’t have a large volume of food waste, because it was being recorded in financial terms rather than weight.”

The system has been straightforward to  implement, with staff putting waste into bags  as they prepare food throughout the day. Elior has also posted signs in the canteen to raise awareness around uneaten food. Using clear bags for food thrown away has  helped to emphasise the quantities involved. 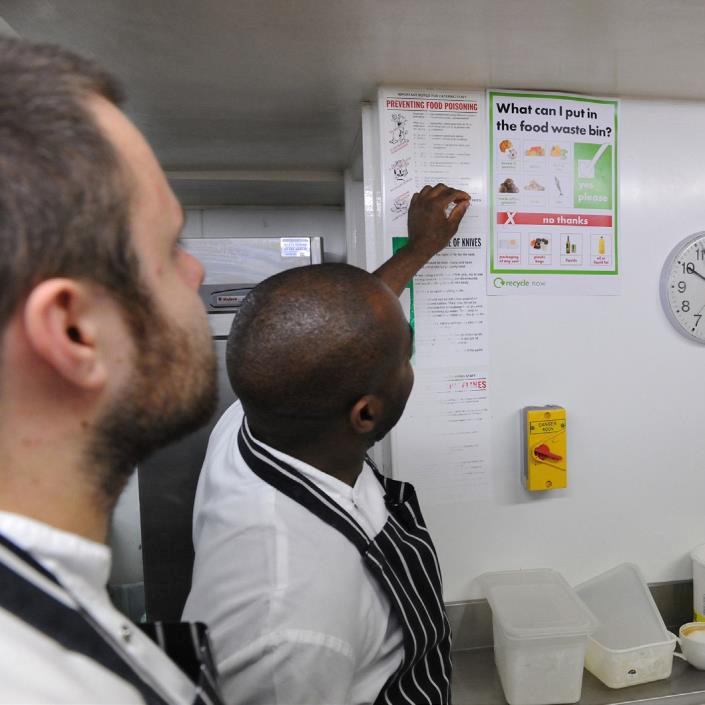 The review has helped Elior to highlight areas for improvement, cut costs, and demonstrate its  commitment to the environment. The company is exploring the potential for a separate food waste collection for disposal to anaerobic digestion (AD). It also aims to apply the monitoring systems to other sites around the UK.

“This has been really simple, with easy results, and the site staff have been able to see that it’s had a really significant impact.”

This website uses cookies to improve your experience while you navigate through the website. Out of these, the cookies that are categorized as necessary are stored on your browser as they are essential for the working of basic functionalities of the website. We also use third-party cookies that help us analyze and understand how you use this website. These cookies will be stored in your browser only with your consent. You also have the option to opt-out of these cookies. But opting out of some of these cookies may affect your browsing experience.
Necessary Always Enabled

Any cookies that may not be particularly necessary for the website to function and is used specifically to collect user personal data via analytics, ads, other embedded contents are termed as non-necessary cookies. It is mandatory to procure user consent prior to running these cookies on your website.