The Harrington Arms in Gawsworth, Cheshire is a country pub with a traditional menu.

Gross profit is up by an estimated 5-6% with around 2.5% of this due to better control of food waste through monitoring.

Andy Wightman, tenant at the Harrington Arms and his Business Development Manager suspected problems in the kitchen as gross profit on food was lower than expected. Although initially sceptical, Andy agreed to try separating and measuring food waste. Reducing harm to the environment was an additional motivation, as he says “we like to do what we can without severe financial implications.” 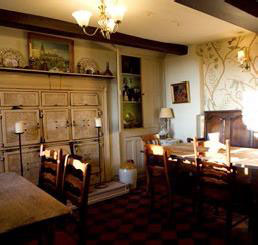 Nick Burns, Robinsons’ Food Development Manager briefed Andy on how to separate and measure food waste and Andy then sat down with the kitchen staff and had an open and frank conversation about why the process needed to happen. He says “they quickly bought into it because they could see the benefit particularly in measuring plate waste and being able to see if there was something coming back all the time”.

After separating food waste into bins for ‘spoilage’, ‘prep’ and ‘plate waste’, these were weighed and emptied by the chefs at the end of each night. The chefs wrote the weights down and entered them into the Food Waste Calculator developed by Manchester Metropolitan University as part of the Greener Retailing project with Robinsons brewery.

Andy helped to motivate the head and sous chefs by offering to reward them financially if gross profit improved.

“This was a good exercise with perfect timing. My advice to other pubs is definitely do it. The
key is to enrol in the staff it needs to be sold in the right way”.

During the first week of measuring the pub was throwing away as much as 21.5 kilos of food per day worth an estimated £25.79. This would amount to five tonnes of food worth an estimated £6,226 over the course of a year. Taking into associated costs (such as energy used in cooking and storage, staff time, waste disposal and water) the true cost of food waste to the business is estimated to be £10,999 per year.

Between week one and week four, total waste reduced by 33% with an estimated annual saving of £2,069 on food purchase alone. Gross profit is up by an estimated 5 6% and Andy estimates that around 2.5% of this can be attributed to more effectively controlling waste through monitoring.